[Joseph McStay had two Intuit On-Line QuickBooks accounts. His first and primary account was titled “Contacts”.  The Contact account was used to keep record of receivables and payables for McStay’s on-line company Earth Inspired Products (EIP), and was also used to track his personal finances.  McStay did not actually write checks from either account (using his computer), it has been suggested that he instead would hand-write checks and later add the details to the Contact Account.  The Custom account was used exclusively for McStay’s work with Merritt.

Charles Merritt has never made a public statement about this check-writing.  There is some indication that Merritt claimed to law enforcement that he was given permission to access not only Joseph McStay’s bank account, but his credit cards, as well.  Soon after the June 15, 2015 preliminary hearing Merritt defense attorneys seem almost to concede some type of embezzlement or check fraud on Merritt’s part.  But details remain unclear, and Merritt has since acquired new representation.  Interview with Merritt Atty. Jimmy Mettias

What the public has never been told is if the amounts Charles Merritt paid out to himself and Metro Sheet Metal, on McStay’s account, were for amounts actually owed. Or did the amount exceed what was owed?  ( Metro Sheet Metal is a California based vendor that fabricated steel specifically for the water features custom made by EIP.)

On a side note, found in the McStay Isuzu Trooper was an EIP checkbook, that Joseph McStay probably had with him the day of his meeting with Merritt (unless that checkbook was placed in the Trooper after the murders)–if Merritt was owed the money paid by checks drafted after the family went missing, why wouldn’t Joseph McStay have simply written those checks at the lunch meeting with Merritt?

As stated before, no mention has been made as to where Merritt was when he allegedly wrote these checks.  We only know that the checks (with one exception) were written from a computer (or device) located somewhere other than the McStay residence.  If Merritt admitted to authorities that he did write the checks with permission, did he fail to also disclose WHERE he was when writing the checks? 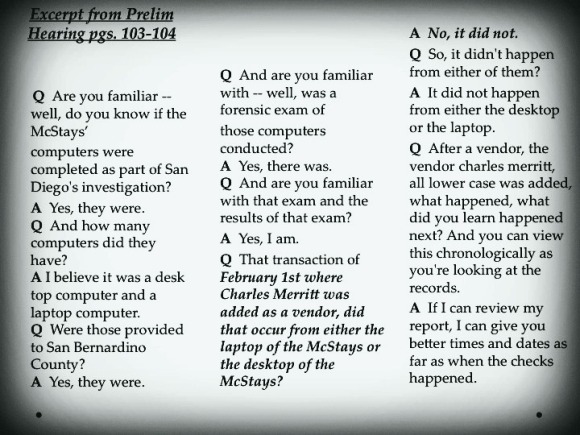 In fact, it seems that even as of October, 2014, investigators are unsure as to exactly where Merritt wrote the checks in question from. Below are excerpts from SBSW 1663.  This search warrant was for the AT&T air card used by the Merritt family during the time of the murders.

On February 4, 2010, the day the McStay family vanished,  investigators believe a check was written on the desktop computer in Joseph’s home office at 7:59 PM.  This check is never printed and is later deleted at 8:05 PM.

There are five checks total that will have been written after February 4, 2010, but are backdated and reflect February 4 as the creation date. (Two of these checks were written out to vendor: Metro Sheet Metal. And hand delivered to that company by Charles Merritt)

The following excerpts from search warrants on this case, explain some of the findings of investigators.