The data on the Bole’s Exhibits Broken Down

“Seizure Time” is the time it takes for the cell phone to connect with a given tower.  As is evident in this exhibit it took almost a minute for each of the calls made from Merritt’s phone to actually reach a tower and get signal from it.  However, juxtapose this to the length of time Merritt was able to maintain contact and there is a huge discrepancy.

Though it took almost a full 30 seconds for Merritt’s cell phone to connect to a tower, the phone only maintained contact with a tower for up to, 9 seconds, most calls lasting about 2 to 3 seconds.

This is never explained at the Preliminary Hearing.

[Purely anecdotal–but I know when my cell takes a very long time to connect, but my calls get dropped quickly, I am always close to being out of cell tower reach.  Could it be that Merritt is much farther from the towers his phone pinged, then is thought by investigators?]

The Columns for “Date and Time” give information regarding origin of call, numbers called as well as relationship of subscribers.  The Cell Tower Location numbers help pinpoint where geographically a call was made from by using coordinates and Cell Tower IDs.  These range from Tower Cluster IDs to specific Tower IDs–to exactly which sector of an antenna was pinged.

Important to note, that unless these indicators are recorded in real time and triangulated, getting an exact read on where someone was when they made a call is virtually impossible. There are exceptions to this (See: Dateline episode-The Red Shoes-as an example of triangulation after the fact)  But as a general rule, accurate triangulation can only be done in real time because there are so many factors that influence how and which tower a phone will decide to ping.

The variables are on where a person is when they ping certain towers can average within a 4 square miles radius, but can be as much as 38 miles (maybe more).

Which means that in any given ping range, a person could be near a tower, 1 mile away, 2 miles away, 4 miles away, or even 38 miles away from the tower.

So the 85 azimuth question is WHERE WAS MERITT when his phone pinged in the high desert on February 6, 2010?  And was he, in fact, with his phone at that time?

(With more and more GPS installed phones, exact location may become easier.  Cell Tower Pings do not work the same way GPS does.)

WHAT ALL THE OTHER STUFF TELLS US:

(Location Area Code) this is a grouping of cell towers that work together to cover an area. 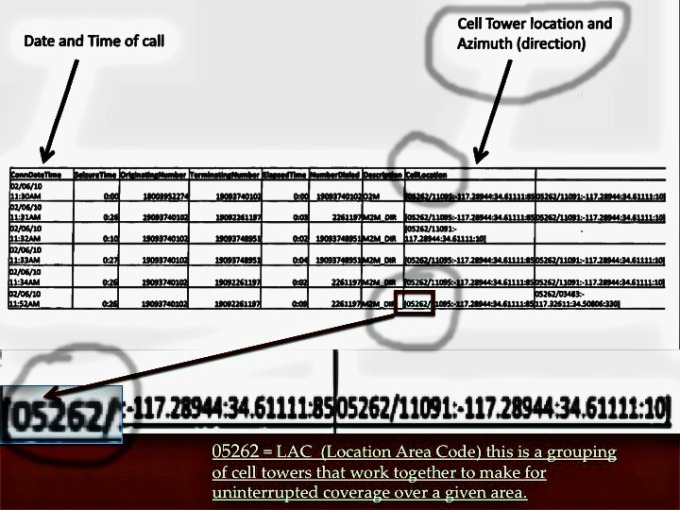 (Tower ID) Is the ID of the specific tower, rather than the area of the tower cluster. 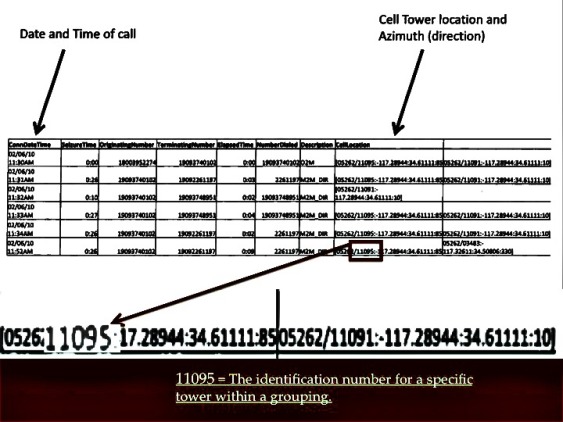 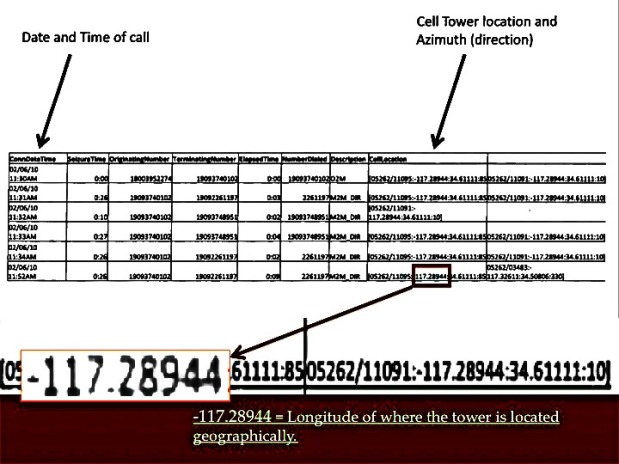 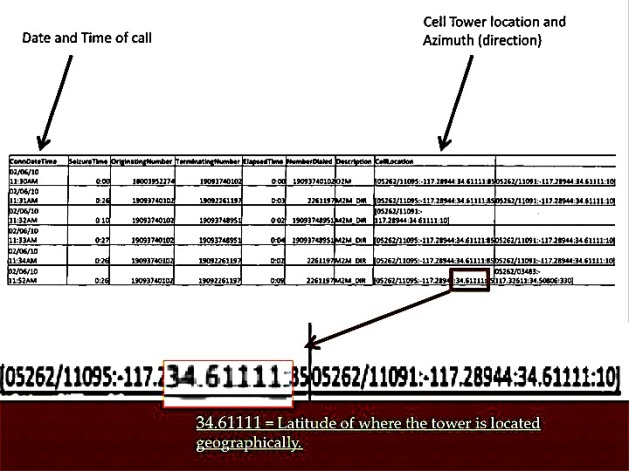 (Coordinates that begin with 34 and 117, are in San Bernardino County.)

The last numbers – 10, 85 & 330 are the Azimuth Readings.  The reading that seems most prevalent on this exhibit is 85, however 330 and 10 pop up a lot as well. It is never fully explained at prelim what this might indicate.  Azimuths of 330 and 10 point to a phone pinging from Oro Grande more so than Victorville. 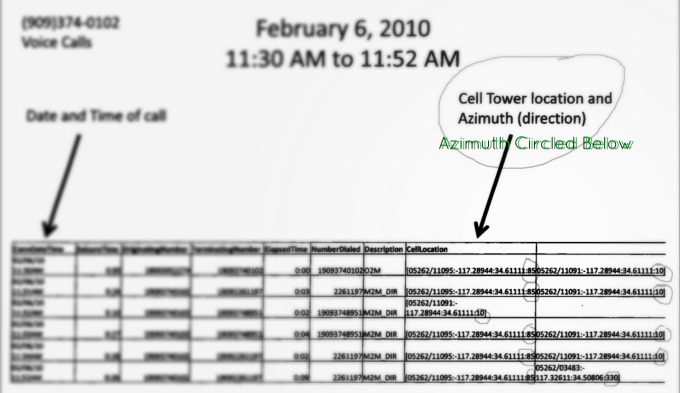 (Azimuth — the location of an object, stars, geographic, whatever, in relation to Due North.)

From there mark the circle in increments of 10 (see below).  And get ready to slice yourself a big serving of cell-phone-ping-range PIE!

In the case of cell phone antennas there are some variables, but with your standard 3 sector antenna, each sector having a 120° range (shaped like a fan from the sector center), equalling 360° radius in total. 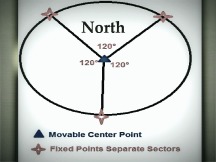 The predominate azimuth identified in Boles’s Exhibit # 1 is 85.

85 is then the CENTER number of the sector that was pinged.  Or it is the point to your big ole’ piece of the azimuth pie.  There are two other numbers you need to find to get the range or approximate size of that slice of pie:

To figure out the beam width from there–

Add 60 to the number to get your ending point.

(Where the azimuth pie piece is in relation to due north, depends on the angle at which the tower producing the radio waves is placed.  This can vary greatly from tower to tower.) 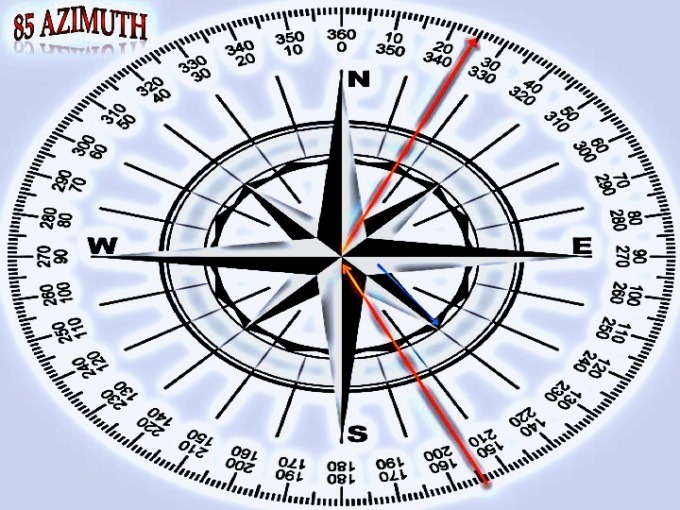 On a side note: 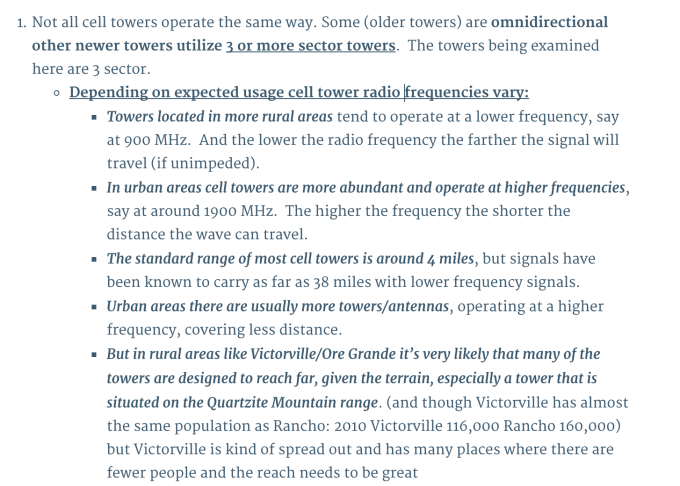