One theory put forward by the state is that defendant Charles Merritt may have returned to the McStay home some time in the following eleven days after the murders, to clean.   But could he, or anyone else, have done this without being noticed by a neighbor?  There were McStay neighbors unemployed and at home during the day, and in a cul de sac, could a non-resident park and enter the McStay home and not stand out?  Wouldn’t the two abandoned McStay dogs (who were reported to animal services for incessant barking by neighbors) have alerted neighbors to the presence of an intruder?

Here is what I could find from stories in the news and by way of Google satellite photos.

[Also, could it be that the vehicle captured on a neighbor’s surveillance camera, is STILL a red herring, and not related to these murders, at all?]

Below is a Google satellite photo showing approximately where neighbors resided who were interviewed or mentioned in published news accounts of this case. I am deliberately off on the addresses because there is no reason for the exact homes to be identified. This simply gives a general idea of the awareness within the neighborhood.

The two photos below show the rear of the McStay residence. It appears that in order to access this rear area or the McStay backyard, you would either have to come from the mountains (see expanded photo below), or access it from the backyard of a home on Lake Circle Drive or the other Avocado Vista street that connects Vista Lane and Circle Drive.  There does not appear to be any other way to access this.  The yards look as if they have no walk-ways between them. 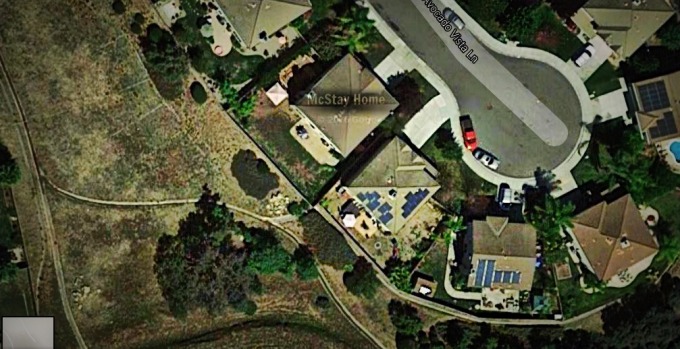 The three photos below show the relationship of the McStay residential complex to the Old Hwy 395; Highway 76; & I-15.

Dulin Road travels in one direction toward Hwy 76 in the other to I-15 & Old Hwy 395.  Dulin intersects with Avocado Vista Lane only at one point, but intersects with Lake Circle Drive at two points.

Avocado Vista Lane and Lake Circle Drive are the only two streets in the complex (I think) that intersect directly with Dullin Road and by which you can go directly deeper into the complex.  Most of the other streets either lead to dead ends, or you have to take an additional street to go farther.

Same satellite picture from another angle, and absent the blur at the edges. 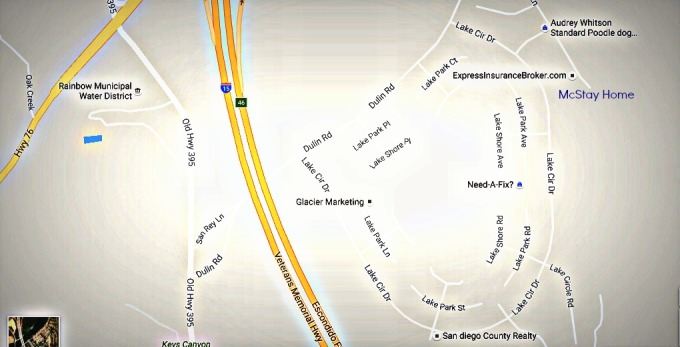 Avocado Vista Lane Mailboxes Located across the the street catty corner to the McStay residence.

Though the satellite shots below are from 2007, I found as many as 10 white utility trucks parked about a block from the McStay Residence.  Is it possible that the bottom 18 ” of a truck captured by a neighbor’s surveillance camera has nothing to do with this crime and was simply someone turning around, confused within the maze of cul de sacs in the complex?

From the articles below it seems that though neighbors to the McStays didn’t see anything that gave them cause to believe a crime had been committed, neither were they indifferent or unaware that something was not quite right at the home.

Neighbor on finding of McStays

List of what the neighbor’s observed (based on accounts found in the news):

One question, all the above brings to mind, is that with so many neighbors who were alert in their neighborhood, could killer/s really return to the home to clean the carnage, and not have been observed by someone?  How would the killer know when the neighbor would stop by to feed the dogs, for example? 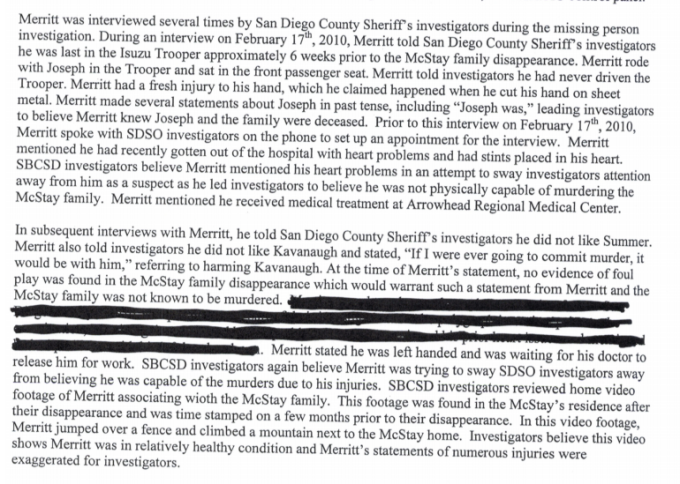