…to convict a man? Absent any new evidence (or absent any new evidence that San Bernardino County DAs were willing to investigate) prosecutors on People v. Merritt contradicted in closing, a four year old narrative.  And they did this multiple times. In multiple ways.  If a position can be bi-polar, that would be the state’s theory of this crime as they bandaged debunked assertions in their final statements to the jury.

And even more remarkable, not one of the new narratives had any real evidentiary support.

Don’t get me wrong. New evidence had been revealed at trial. But not by the DA, by the defense.  Prosecutors not only ignored three CODIS-ready DNA profiles found on items in the graves of the McStay family by defense experts, they ridiculed the science used to generate and analyze that DNA.

San Bernardino County DAs termed the cutting-edge science utilized (probabilistic genotyping)  as something akin to “Frankenstein” even though the county adjacent to San Bernardino–Kern County–has employed this method, hiring True Allele as a consultant.  (True Allele/Cybergentics performed the final DNA analysis for the defense).

In essence, People v. Merritt is your “grandmother’s” trial.  With the defense doing everything they could to nudge it into the 21st century.

Add to the above, the defense brought forward phone records and computer transactions that put ousted EIP partner Dan Kavanaugh’s alibi into serious question. Kavanaugh claimed to be in Hawaii at the time of the murders, but phone and computer forensics place him in San Diego the weekend of February 4th. But DAs didn’t seem to care.

And then there were the disembodied headlights captured within grainy surveillance video, that for years were thought to belong to Chase Merritt’s truck, turning out to be inconclusive, at best.  This video was purported to capture Merritt as he departed the scene of the murders the night of February 4, victims in tow.  But nothing of the kind was proven.

Two of the three experts brought to the stand stated Merritt’s truck was likely excluded, and the one holdout, for all his beautiful graphics, failed to match the video truck to Merritt’s. This failure to place Chase anywhere near the McStay home, with any certainty, on February 4th, all but shattered the prosecution’s case. Not to mention that there was zero evidence that a brutal crime had even taken place in the McStay residence.

So, did prosecutor’s and investigators stop and consider they might have the wrong guy?

What they did instead was make some weird shit up and invent a new timeline and narrative, based on little more than conjecture.

(If law enforcement is allowed to play this loosey-goosey with the truth, than the potential that anyone can be implicated in any crime, at any time, is there.)

For a quick review, the L.A Times article below and the YouTube video of San Bernardino Sheriff’s department announcing Merritt’s arrest give a quick synopsis of the original narrative offered:

The narrative at the preliminary hearing in 2015 stayed consistent with the above.  The honorable Judge Michael Smith gave the following reasoning as to why he held Chase Merritt to answer for the charges (Pg. 151 -153 June 15, 2015 Preliminary Hearing Transcript):

Search warrants that were published shortly after the prelim can be found here:

A break down of the the state’s original narrative and problems they encountered proving it are listed here:

A funny thing occurred midway through trial.  During his cross examination of defense blood expert Randolph Beasley DDA Daugherty suddenly put forward the theory that the murders might have occurred the morning of February 5th, rather than the evening of the 4th. (side-note: even though the assertion that the murders occurred in the the McStay residence was central to the state’s case, they failed to bring a blood expert to the stand)

At the 34:06 point in the above video DA Daugherty asks Beasley:

“Well, let me ask you this. Let’s assume that the family was murdered either the night of February 4th or the early hours of February 5th, if a person between 7AM and 10:15 was unaccounted for, that would be three hours and fifteen minutes that they could potentially clean up. Right?”

If the lights don’t fit…

The problem with any SBC DA even suggesting a change in timeline is that the lynchpin to their entire case has always been that Chase Merritt had no explanation for where he was during specific time-periods that San Bernardino investigators guessed individual acts of the crime were carried out. Specifically the evening of February 4th, the morning of February 6 & February 8.

(Investigators and DAs do appear to have been guessing, as no objective timeline for these murders has ever been produced.  There isn’t even concrete evidence of when the Trooper was abandoned at the San Ysidro border. All we know for certain is that the graves appear to have been in place by February 12th, and this evidence was discovered by the defense.).

Once this crime is thought to occur the morning of the 5th, Chase is all but excluded from directly participating, because in addition to his morning drive, he is home by early afternoon writing checks on QuickBooks and pinging towers consistent with his presence in Rancho Cucamonga.

The other major problem with the state even suggesting that the murders took place on the morning of the 5th, is that a February 5th murder debunks the lion-share of the “evidence” they originally claimed supported their narrative.

If the McStays are alive the evening of Thursday, February 4, then:

(Even if a QB transaction is deleted, as happened on Feb 1 & 2, the vendor name will be there.  And if Joseph opened the program and wrote the check to Chase the night of the 4th, from CUSTOM he would have clearly seen that the name had been added. The logical conclusion to reach then, if it is Joseph writing the check on the 4th from the E-Machine in his office, is that it was Joseph who added Chase’s name to CUSTOM on the 1st. And it was Joseph who instructed Chase to write the check on the 2nd.)

Also, why would Joseph McStay call a man he had just fired that afternoon (and had called 7 times after) again at 8:28 PM, if that working relationship was over?

SBC DDA Brit Imes and his ever varying theories of the crime:

DDA Imes’s closing, is fanciful and imaginative.  I swear it seems as if he perused blogs like this one (and a few others I followed during trial) to concoct narratives that venture way, way outside the parameters of what this trial was supposed to prove-at lease in terms of all presentations previously made by the state.

DDA Brit Imes suggests for the first time at closing, that the vehicle Joseph McStay drove to Rancho Cucamonga on Thursday, February 4, 2010 for his lunch meeting with Chase Merritt (a meeting that Imes, for reasons that are unclear, hints never happened) was not the Isuzu Trooper-as has been thought for years– but was instead the Dodge Ram Truck (the other McStay vehicle). 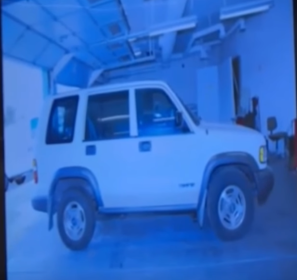 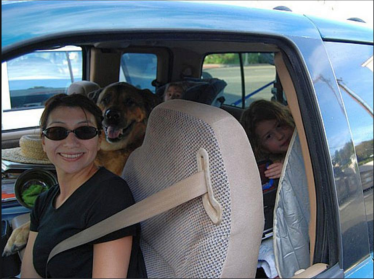 Where he gets this notion is unclear, except that Imes appears to think Summer was such a “bitch” that Joseph wouldn’t dream of leaving her without a vehicle that had carseats for the kids.  It doesn’t seem to occur to DDA Imes that child seats can be moved,  or that the real reason not to leave mom at home with the kids, but without a vehicle that has carseats, is for the safety of those kids, not because mom is a bitch.  Or that DNA evidence found in the Trooper contradicts this never-even-hinted-at-before, theory.

(I actually believe Imes was reading this blog.  I pointed out that the carseats being found in the Trooper was odd, given that we know Summer drove to Ross’s on February 4, while Joseph was at his meeting with Chase. My theory is that the carseats were moved into the Trooper after Joseph came home, either the 4th or the morning of the 5th. I have never read this theory anywhere else, so I’m going to take credit.)

There is one glaringly obvious reason Imes might want to plant this in the mind of the jurors: A theory that Joseph drove the Dodge rather than the Trooper dispels any possibility of transfer DNA to the Trooper steering wheel from that lunch meeting.

But I”m getting ahead of myself.  DA Imes begins his new theory of events asserting that on February 2, which is the first day that an actual check is drafted, printed and cashed from the QuickBook’s CUSTOM account, Chase had to have written this check without Joseph McStay’s approval, because he didn’t got to the McStay residence on this day:

Not sure how familiar Imes is with his own evidence, but FBI Special Agent Kevin Boles testified to, and even presented graphics that show: 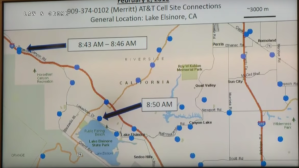 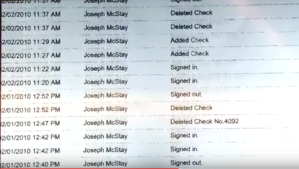 Then Imes makes a HUGE deal out of Chase receiving TWO checks on the second.  Joseph did on occasion write two separate checks to the same vendor.  We don’t know why Joseph hand wrote a check for Chase, even though he knew Chase would be drafting a check on the CUSTOM account once he got to his residence, but the reason might be that Joseph liked to keep his payments separate.  It may simply have been easier to separate payments based on category.  Perhaps it was just easier that way…but there isn’t really anything all that suspicious about it either.

It does appear that Joseph gave Chase computer checks from the 4200 series, while he wrote his checks from the 4100 series (see pics below), Joseph would know immediately whose check was whose. 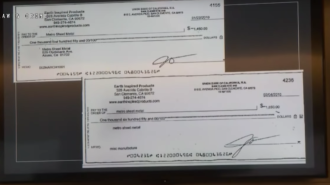 It is undisputed, as well, that the check below was signed by Joseph McStay. 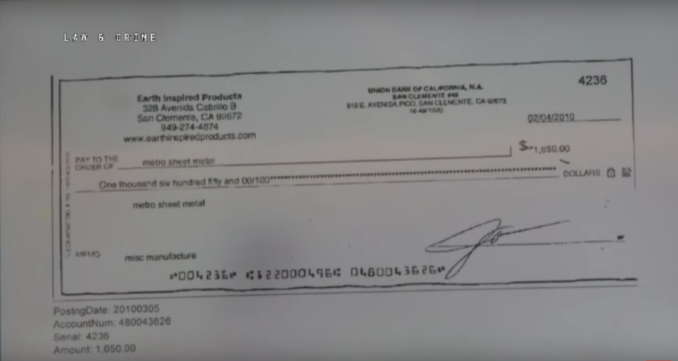 From this ledger generated by forensic accountant Dennis Shongren, the checks drafted by Chase for the Saudi project are in numerical order.  So there appears to have been a method used. 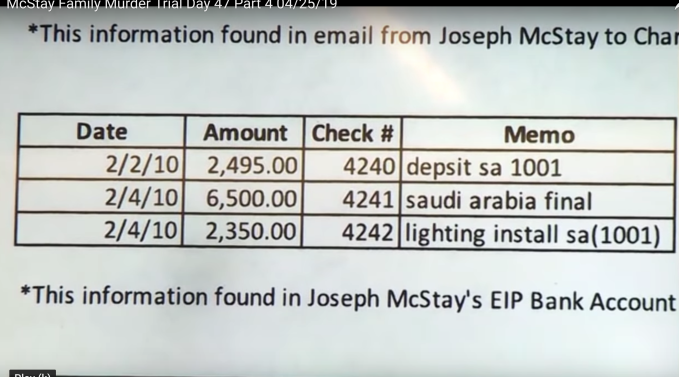 The other big deal for Imes is that he contends that the signatures on the two checks dated 2/2/10 appear to be different.

But here’s the thing about that:  Joseph’s “known” signature also varied. (see below)

Signatures below are ALL Joseph McStay’s. And they all look a wee bit different.  And it is important to note, that once again, though the state’s case centered around the theory that signatures on checks drafted after February 2 on the CUSTOM account were all forged by Chase-the state failed to bring in an expert to verify this.

All checks below believed by the Prosecution to have been signed by Joseph McStay. 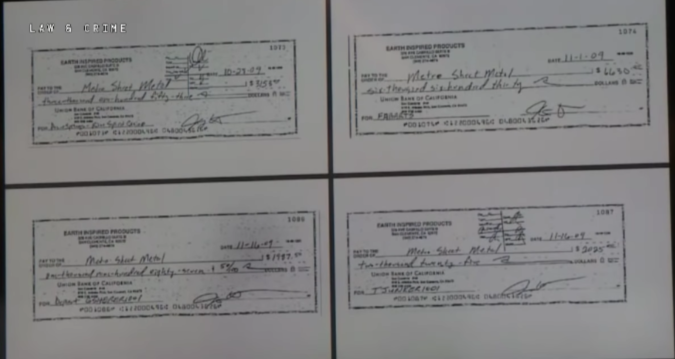 This check was also signed by Joseph McStay 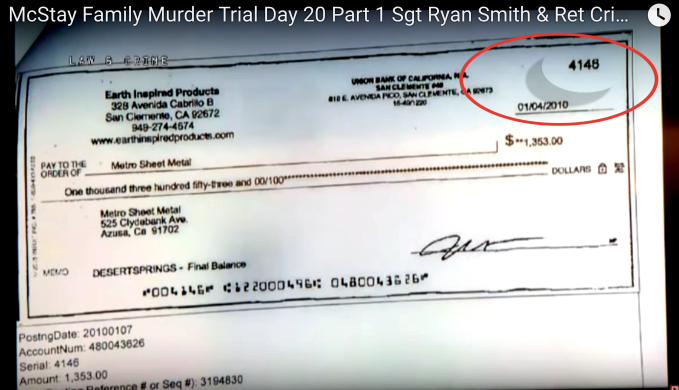 So looking at the two checks for February 2, it seems very possible that Joseph signed them both.  Without an expert, how is anyone to know?