A question was asked on one of the McStay trial forums, and though it was basically ignored there, it caught my attention:

“If the family was killed in the home, why was a child’s backpack found in the graves?”

Just as a reminder, there was a backpack that is believed to have belonged to one or both of the McStay children found in the grave with Summer and Gianni (pictures of Joseph Jr. wearing it are captured in a family photo). The contents of this backpack was a spoon, a small pickaxe and a worn paint brush.

These three items are like a trivia question in a quiz-game.

“You find a backpack with these three items inside, what were these items used for?”

For the longest time I thought that the paint brush must be related to whatever painting Summer had been doing the day of the murders/abduction.  It made sense that perhaps if the family weren’t killed in the home, but only taken from there, that the back pack and contents were a way to mollify the children in route.

But after hearing testimony from McGyver McCarger my thoughts on this changed. In his testimony, McCarger explains that the Sunday prior to the family going missing he encouraged them to get to a park, and exercise the kids.  This was so house painting could be completed absent energetic toddlers underfoot. And the suggestion succeeded both in giving McCarger an opportunity to paint, and in calming the kids so when they returned, tuckered-out, more work could be done with them present.

From this testimony and the searches performed on the McStay computer for “Dinosaur Train”-suddenly that backpack and its contents take on new meaning.  (Dinosaur Train is a PBS show for kids, where dinosaurs ride trains and children learn about the species and other kid-stuff, from this implausible but delightful premise.  It’s a really cute show. Dinosaur Train)

Could it be that, the child’s backpack didn’t simply contain random objects, but that it was in actuality a homemade excavating-kit for digging up “dinosaur bones”?

And though I can’t know this for certain, it seems like the inspired creation of an engaged parent.  Just maybe, Summer, observing how much her children loved Dinosaur Train, was furthering the adventure by showing them how one excavates for dinosaur bones.  You dig, you use a pickaxe to loosen any bones captured in rock, and once you have your prize you gently sweep away the sand and debris with a paint brush. [Joseph Jr. and Gianni’s grandmother does confirm on the stand that this backpack full of tools was, in fact, something the boys used to excavate for dinosaur bones (rocks). So, then why was it in the graves if the family was taken from their home deceased? This seems more in keeping with the family being abducted alive.]

A few things about this make-shift kit, if this is what I think it might be.

Joseph McStay was discovered with keys in his pocket. Among the keys for the home and Isuzu, there were two Chateau padlock-keys assumed to be for the shared storage with Chase Merritt.  But they could just as easily have been to the locks for Pods. where most of the McStay belongings were kept at the time they went missing. 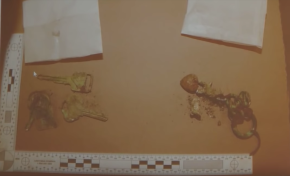 Does the presence of the keys, coupled with that of the backpack, relate an entirely different story of what activities the McStays were engaged in just prior to their disappearance?

Don’t know.  But it seems as if that Friday morning the McStays could still have been alive.  And that they left their home of their own accord, perhaps to give the kids some outdoor playtime before it rained, and that they were intercepted somewhere else.  I have no idea how or by whom they would have been intercepted, but this possibility exists.  And it does seem plausible in light of evidence known now, that we in the public were not made aware of before trial.

*Would Joseph have left Summer without child seats for the Dodge on that Thursday Feb. 4, 2010?  (Joseph knew he would be away for at least three hours, and there were rumors that Summer did leave the home and shop that afternoon at Ross.  Wouldn’t responsible parents, like Joseph and Summer, have made certain that the parent driving the children had the child seats in their vehicle?) 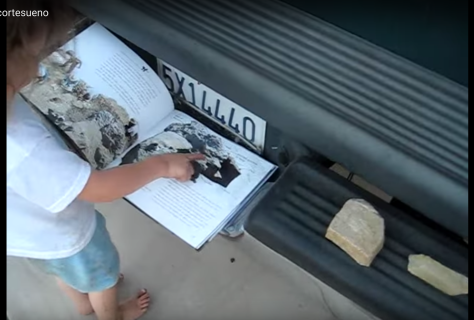 On an unrelated note: Another odd find in the graves is the towel below.  This is a specific brand that is usually purchased on-line or at locations like Costco.  Was this brand in keeping with other towels owned by the McStays?