“A jury verdict is just a guess – a well-intentioned guess, generally, but you simply cannot tell fact from fiction by taking a vote.”

Could it be that all investigators on this case, both those from San Diego County and those from San Bernardino County, got the timeline of critical events on this case completely wrong?  Did the real killer escape notice because that person had a convincing alibi for the evening of Thursday, February 4, 2010, but were never asked their whereabouts for Friday, February 5th?

Not in dispute is that an objective timeline for the elements of this crime has never been established.

The time of death for the McStays is unknown.  DAs at trial admit as much, stating in closing arguments that they didn’t know when the family was killed. No one knows where they were killed. Or if they were killed at the same time in the same place or at separate times at separate locations. The date of Thursday: February 4, 2010 was based on evidence that can be interpreted in a number of different ways.

As a refresher for anyone new to this case, the theory that the family vanished the evening of February 4th was based on two things:

But there are days in the published phone log of Joseph McStay, where he is not on his cell phone until sometime between 9AM & 11 AM. (Caveat: Summer’s phone records have never been published, so her habits are uncertain. And the McStay landline records and general computer usage are also not known to the general public.)

And the actual identity of that vehicle thought to be departing the McStay drive has never been confirmed.

Could the family have just not used their phones or computer early that Friday morning?  Joseph McStay’s phone log not only showed that many days his cellular phone usage began well after 9AM, but that on most days there was a “dark” period, between six and eight every evening. (otherwise Joseph McStay was on his phone all day long.) This two hour block is a time one might imagine Joseph put aside to spend quality time with his wife and two toddlers. So, it seems possible that Joseph and Summer may have deliberately kept their phones off the morning of the 5th, and were abducted before they were ready to use them.  (Even close family friend, McCarger McGyver at trial stated that he felt some were overreacting when they could not reach the McStay family in the weeks they were missing, and he had been scheduled to see them that weekend.  And he had attempted to reach Summer many times on Friday Feb. 5.  No family or friends sounded the alarm on the McStay’s disappearance. It seems that the McStay family of four had gone off grid from time to time.)

If you work for yourself the only way you can really leave the office is if you turn your phone off.

(Circled in red are Joseph McStay’s first calls of the day.)

And there was a bottle of water and coffee discovered in the cupholders of the McStay Trooper when it was retrieved by investigators.

These items had only Joseph McStay’s DNA on them. All the other items tested in the Trooper were mixed samples, with at least three contributors. Joseph, his wife and the children (Chase Merritt was included as a minor and trace contributor to the steering wheel and a general swab). Whether you believe Merritt’s DNA is there from direct contact or transfer (transfer really seems most likely), it would seem very likely that anything Joseph had been touching all day would receive some transfer DNA from his children and wife.  These were people he certainly had a lot of physical contact with, not to mention touching items they touched.

For the coffee mug and water bottle to only have Joseph’s DNA on it suggests that these items may have been cleaned and freshly filled just before they were placed in those cup holders-not left overnight in the Trooper from the day before.  From pictures taken by investigators, the water bottle looks full.

Was Joseph McStay the type of person to leave his travel mug and water bottle in the Trooper overnight, or would he have been more inclined to bring these items inside to be cleaned for the next day?

Once SBC investigators examined the neighbor’s surveillance, they dismissed the theory that the vehicle captured was the McStay Trooper. However, without any real evidence they then decide this vehicle must be the Chevy 3500 truck Chase was known to drive at the time.  There was no license plate visible. Make and model of the vehicle are unknown. And there are signs of life in the McStay home nine minutes after the vehicle departs. Investigators reached this conclusion absent verified evidentiary support.  Basically it was a wild guess.

Testimony from the Preliminary Hearing: 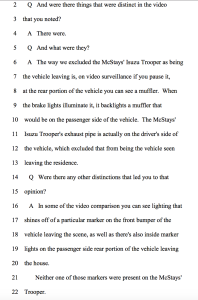 If the lights don’t fit…

But even if they could be the same vehicle, how does one then account for the fact that nine minutes after this vehicle departs there are signs of life in the McStay home, that are completely consistent with known, mundane, behavior of Joseph McStay? And this behavior left a clear digital footprint.  There is computer activity that only makes sense if Joseph McStay is the actor. And an 8:28 PM phone call that pings the tower consistently pinged by McStay’s cell phone, when he was known to be home.

San Diego investigators watched the “Mitchley” video for any sign of a vehicle returning, after that 7:47 departure-and they saw nothing.  Which means that if that vehicle had anything to do with this crime, it never returned that night. The camera of the neighbor whose surveillance captured the departing vehicle somehow malfunctioned the next day-the 5th.  It seems most logical that if a vehicle was driven to the McStay home for the purpose of harming the family, that the vehicle arrived in the morning AFTER the surveillance disabled.

Also, there are clear indications that the family was engaged in, or had just engaged in breakfast, just prior to whatever happened to them, happening.

There are eggs and coffee out. Partially eaten breakfast food.  The dogs appear to have been put outside. Beds upstairs are unmade. Though there are bags of popcorn on the futon (absent a cover); pictures of the McStay children close to the time of the murders show that popcorn was an all-day treat.

The clothing the McStays were buried in/with was casual. They did appear to wear this type of clothing at all times, but it is certainly consistent with apparel for casual morning activities.

Pictures below taken by SDSD Detective Tingley, on first entering the McStay Residence, prior to any cleaning. And prior to search warrant on home being executed.

Important to note is that most of the pictures of the McStay home that the public saw, for years, were taken AFTER the home had been cleaned and reorganized by surviving McStay family members who entered the home prior to the search warrant being executed, and subsequent pictures taken. The pictures seen above are two of the only ones that shows the actual state of the McStay living area and upstairs bedroom when the house was first entered by investigators almost two full weeks after the family vanished.

All the other elements of this crime may also have mistaken times.  The McStay Isuzu  Trooper was towed from the San Ysidro border parking lot on Monday, February 8 but it is not absolutely certain when that Trooper came to be parked in that lot. San Diego investigators never checked the surveillance of businesses around that parking lot to ascertain exactly when the vehicle arrived.  I’m not suggesting parking lot attendants are lying, only that they could be mistaken.  It was super bowl weekend.  Maybe there were distractions.

There is no evidence, objective or otherwise, of when the McStay family was buried in two shallow graves in the the Victorville desert.  The date of February 6 was one built around Charles Merritt’s phone records, not forensic evidence.  The only evidence presented that might narrow when the family was buried were pictures taken by a small aircraft, that the defense located. The date those pictures were taken was February 12. The graves are visible in that picture, so it would seem that family was buried BY February 12.  But there is nothing to show what day exactly, they were buried.  And February 6 seems an unlikely day, because there were torrential rains all morning. And major flooding in the region.

If investigators had the timeline of WHEN this family was first abducted or killed WRONG, then how many possible suspects did they overlook?

(Charles Merritt’s alibi for Friday the 5th is pretty rock solid. His digital footprint that day has him far from the McStay home in the morning. And at home writing checks in the early afternoon. Basically, if this crime began Friday morning, Charles Ray Merritt is excluded as having direct involvement.)

If the timeline is wrong, then did the real killer get away because investigators were asking the wrong questions?